By World Organization for Development On Jan 12, 2022

A young boy with a burned-out car is evidence of the intense fighting in 2015, when Houthi forces were driven out of the city in fierce fighting for the ‘Battle of Aden’.

Seven years into the war in Yemen, UN Special Envoy Hans Grundberg reaffirmed to the Security Council on Wednesday that no long-term solution can be found on the battlefield, urging the warring parties to “talk, even if they are not ready to put down their arms”.

“Genuine political will, responsible leadership and adherence to the interest of the entire population is needed”, he said.

Mr. Grundberg highlighted recent fighting, which he described as being “among the worst…seen in Yemen for years”.

Grundberg to #UNSC: "The continued imposition of road closures &checkpoints across the country, as well as the impediments to imports and the domestic distribution of goods essential for civilians, including fuel, is harming the population in unjustifiable ways."

He spotlighted assaults on Marib, airstrikes in Taiz, and the crucial port city of Hudaydah, increased attacks on Saudi Arabia and the recent seizure by Houthi forces, known as Ansar Allah, of an Emirati-flagged ship.

Raising concerns over the continued detention of UN staff in Sana’a and Marib, the UN envoy called for “immediate access” to them and more official information about their condition.

Meanwhile, as the tempo of war increases, so do fears over the worsening of severe movement restrictions and accusations that the Hudaydah district ports are being “militarized”, especially given that they are “a lifeline for many Yemenis” who rely on them for imported aid, he said.

“Restrictions on the movement of goods and people, is a challenge throughout Yemen”, he said, pointing to road closures, checkpoints, and fuel ship clearances, the last of which was issued back in November, adding that they are “harming the population in unjustifiable ways”.

Amidst significant challenges on the ground, Mr. Grundberg’s office has explored ways to address the parties’ “stated priorities” and end the fighting.

However, he upheld that “disagreements over sequencing, competing priorities and lack of trust” remain obstacles, further underscoring the need for “difficult discussions with and among the warring parties”.

Aimed at facilitating incremental progress toward a durable political settlement, the Special Envoy explained that he had been focusing on developing a comprehensive multitrack approach that covers political, security and economic issues.

“To have a chance of breaking this cycle, we need to establish an inclusive, internationally backed political process that can provide a viable foundation for peace”, he said.

Little ‘cause for optimism’

UN Deputy Emergency Relief Coordinator Ramesh Rajasingham, who is also Acting Assistant Secretary-General for Humanitarian Affairs, painted a grim picture that does not offer “much cause for optimism”.

He enumerated a series of hardships, from 15,000 displaced people over the past month to an alarming increase in clashes, which left 358 civilians reportedly dead or injured in December.

“The war is also causing hunger, displacement, economic collapse and the deterioration of basic services”, he said.

A one-year-old boy eats with his family in a displaced persons camp in Aden, Yemen.

While Yemen has consistently ranked at or near the bottom of global gender equality indices, even before the crisis, the war has made the situation of women and girls even worse, according to the UN official.

“This manifests itself in a myriad of ways, including restrictions on basic rights like freedom of movement, reduced access to education, and higher rates of illiteracy and poverty”, he elaborated.

“And exposure to sexual and gender-based violence has also increased”, added Mr. Rajasingham.

As people struggle to survive, humanitarian work is continuously being hampered “for entirely avoidable reasons”, he said, turning to constraints, the biggest of which is financing. 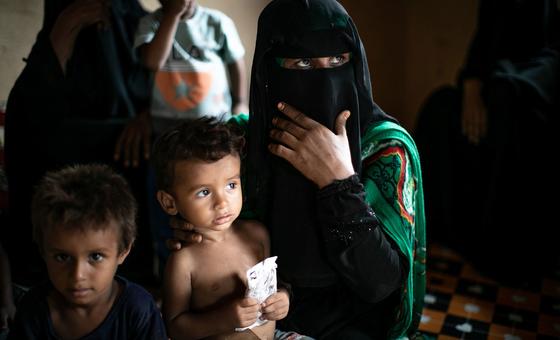 “Last year’s response plan was 58 per cent funded, making it the lowest funded appeal for Yemen since 2015”, said the deputy emergency coordinator, reminding that the lack of financial support had forced the World Food Programme (WFP) to announce food cuts for eight million people.

“We expect this year’s aid operation to need roughly as much money as last year, or about $3.9 billion to help 16 million people”, he continued, appealing to donors for increased support.

The UN official reiterated the importance of “safe, predictable passage into and out of Yemen”, noting that disruptions, such as the opposition Houthi rebels’ (formally known as Ansar Allah) unilateral flight cancellations from 19 to 27 December at the Sana’a airport which they control, which risked undermining aid operations and staff safety.

Meanwhile, Ansar Allah has yet to provide access to two UN staff detained in Sana’a in November, or a third arrested last month in Marib, and the UN continues to search for a “pragmatic, workable solution” to end the grave danger posed by the Safer oil tanker, a stranded and stricken vessel that threatens environmental disaster for the Red Sea.

Finally, Mr. Rajasingham emphasized the importance of delivering “a more effective and inclusive response – including by strengthening the economy to reduce people’s needs”.

This means “a more enabling environment for women aid workers, promoting gender parity among our staff and supporting more investments in gender-sensitive programming”, he said.

However, the senior official acknowledged, humanitarian aid alone cannot solve the crisis in Yemen, conceding that conflict-induced economic collapse is the biggest driver of people’s needs.

“The UN economic framework…requires a mix of financial and political commitments that…could quickly reduce the scale of humanitarian needs”, he said. “The exchange rate is key to people’s ability to afford food and other essential goods, nearly all of which must be imported”.

But commitments also include policy decisions to lift import restrictions and use import revenues for basic services of public institutions to bring down prices and improve people’s lives.

“The most transformative change will come only with an end to the fighting that is supported by a lasting and just peace agreement”, concluded Mr. Rajasingham.

Young girls cross the road on their way to school in Taizz, Yemen.

Ola Al-Aghbary, founder and CEO of Sheba Youth Foundation for Development and a local mediator in Taiz city, said that women have a right to actively participate in political and peacebuilding processes.

She outlined tangible gains that Yemeni women have delivered for their communities while also noting women’s organizations there under-utilized in decision-making.

Ms. Al-Aghbary encouraged everyone to turn into reality the commitment of Security Council resolution 1325 on women and peace and security.

Sudan: 15 attacks on health facilities and workers in two months