By World Organization for Development On Nov 10, 2021

2021 UN Woman Police Officer of the Year, Superintendent Sangya Malla of Nepal, currently serving in the UN Organization Stabilization Mission in the Democratic Republic of the Congo (MONUSCO).

This year’s UN Woman Police Offer of the Year Award was officially handed over to Superintendent Sangya Malla on Tuesday, for her groundbreaking work in the Democratic Republic of the Congo (DRC) – one of the highlights of the annual Police Week celebrations taking place at UN Headquarters in New York.

The Nepali officer was honoured for enhancing the safety and welfare of UN ‘blue helmets’ in the DRC peacekeeping operation, MONUSCO, by helping to establish and lead the Health and Environment Unit, which has helped lessen the spread of COVID-19 and other serious threats.

She hopes this award will inspire her colleagues today & in years to come! #A4P 👮🏽‍♀️🚓 pic.twitter.com/cTNtgYh50h

“Superintendent Malla, you have done your country, MONUSCO, and the entire United Nations family proud”, Secretary-General António Guterres said, in a video message.

Mr. Guterres described her service as “another reminder” of the importance of achieving gender parity across the UN system, adding that “she represents something far larger – the many contributions of women police officers in advancing peace and security around the world”.

“Through her work, Superintendent Malla embodies the best of the United Nations”, he underscored, passing on his congratulations.

He welcomed the Committee’s support to UN policing, including its recognition of the importance of nationally and locally-supported policing priorities; in generating a highly qualified, gender-balanced workforce; and the participation of top police officials in the third UN Chiefs of Police Summit, which took place in early June.

In Our Common Agenda, the Secretary-General called for a “new vision on the rule of law” and a “new agenda for peace”.

“It is my firm belief that United Nations Police could not be more instrumental in helping the international community realize both of these tall orders”, said Mr. Carrilho.

After more than 20 years in the country, he upheld the importance of assisting security institutions to bring together policing services for “a unique police institution”.

See also  Ukraine: ‘Do not fail the cause of peace’ Guterres urges

Mindful of the many challenges ahead, he assured that MONUSCO has “the deep certitude” that UN policing in the country can help ensure “the durable peace that the Congolese people have been longing for”.

Police Commissioner Berethe expressed his gratitude to Police Contributing Countries and to all Member States, for their continuous support to field Missions “with adapted resources, fit for purpose to deliver according to mandate’s previsions”.

“Through close collaboration with local counterparts and by conducting regular needs assessments, UNMIK UNPOL and local law enforcement agencies, have forged a key partnership based on constructive cooperation and trust”, she told participants.

Throughout the pandemic, UNMIK continued to deliver on its mandates while also supporting local law enforcement institutions in tackling the unprecedented crisis that dramatically impacted the country’s governmental institutions, including rule of law institutions. 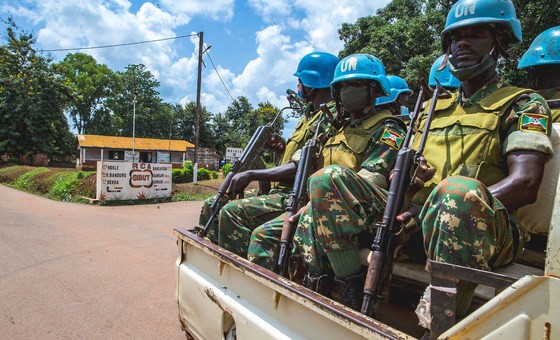 She maintained that supporting local ownership, empowering law enforcement and implementing the women, peace and security agenda, while providing innovative solutions, “are the key drivers in supporting the development of the rule of law in a sustainable, cost-effective manner”.

Elaborating on UN Police efforts to protect civilians in the Central African Republic (CAR), MINUSCA Police Commissioner Christophe Bizimungu, said it was “one of the priorities” of the mission’s mandate.

Against the backdrop of a security situation shaped by serious human rights abuses, he said protection of civilians by MINUSCA personnel, “involves a series of actions necessary to prevent and respond to threats of physical violence against civilians by armed groups and individuals and State forces”.

And MINUSCA is also committed to their protection through dialogue, mediation, and conflict resolution, including by fighting against impunity and re-establishing an effective judicial system.

She underscored the importance of political sensitivity in all UNPOL and Mission work.

“UNPOL tasks have political impact and political issues have impact on UNPOL tasks”, said Police Adviser Koivu, noting that UNPOL officers must recognize the political context of their work, as the UN respects host States’ ownership and seeks their support.

She described community policing as an important tool to maintain stability, encourage dialogue and build trust, which fosters a positive environment for the overall peace process.

Women peacekeepers from Slovakia play an important role upholding UNFICYP’s mandate to contribute to the maintenance and restoration of law and order in Cyprus.