By World Organization for Development On Feb 1, 2022

People are transported by boat on a river in Indonesia.

A broad definition of wetlands includes ecosystems such as lakes and rivers, underground aquifers, swamps, coral reefs, and many others; but also, human-made artificial sites such as fishponds or reservoirs.

Though they cover only around 6 per cent of the Earth’s land surface, 40 per cent of all plant and animal species live or breed in them.

Wetlands are also vital for human wellbeing and security. More than a billion people across the world depend on them for their livelihoods, about one in eight people on Earth. 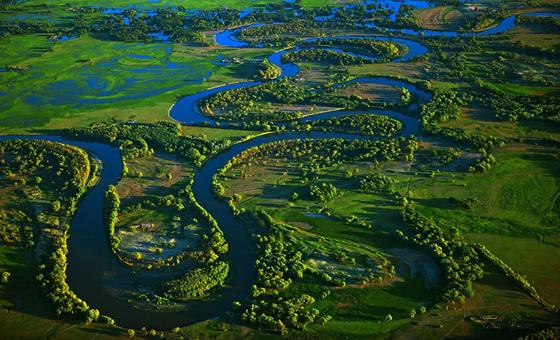 An aerial view of wetlands in China., by UNDP China

‘Punching above their weight’

According to the UN Environment Programme (UNEP), these ecosystems are also the unsung heroes of the climate crisis.

In fact, they store more carbon than any other ecosystem, with peatlands alone storing twice as much as all the world’s forests.

And inland wetland ecosystems absorb excess water and help prevent floods and drought, something critical to help communities adapt to a changing climate.

In the words of Leticia Carvalho, Principal Coordinator for Marine and Freshwater at UNEP, healthy wetlands “punch above their weight in terms of benefits.”

The theme for the very first World Day is “Wetlands Action for People and Nature”.

It serves as an urgent call to act and to invest financial, human and political capital, to save the world’s wetlands from disappearing altogether – and to restore those areas already lost.

Wetlands are disappearing three times faster than forests and are Earth’s most threatened ecosystem. In just 50 years – since 1970 – 35 per cent of the world’s wetlands have evaporated.

Human activities that have fuelled this include agriculture, construction, pollution, overfishing and overexploitation of resources; together with invasive species upsetting the balance, and climate change.

Some 85 per cent of wetlands present in 1700, were lost by 2000, many drained to make way for development, farming or other “productive” uses.

Did you know wetlands🌿store more carbon than any other ecosystem?

Yet are one of Earth's most threatened habitats⚠️

This #WorldWetlandsDay🌍, learn about the global efforts protect & restore these unsung heroes of the climate crisis⤵️ https://t.co/Y8mK6bXnom

This is why, Ms. Carvalho explained, their protection is a priority for UNEP and a special focus of the UN Decade on Ecosystem Restoration.

According to the expert, the UN Climate Conference (COP 26), last November, “started to shine a spotlight on the role of finance and political will.”

“[But] more of both need to be channelled towards wetlands, enshrined in countries’ Nationally Determined Contributions (NDCs), and better integrated into development plans”, she said.

Teeming with different species, wetlandsare also a key ally in the fight to stop biodiversity loss.

Over 140,000 species, including 55 per cent of all fish, rely on freshwater habitats for their survival. Freshwater species are important to local ecosystems, provide sources of food and income to humans, and are key to flood and erosion control.

Despite this important contribution, wetland species are going extinct more rapidly than terrestrial or marine species, with almost a third of all freshwater biodiversity facing extinction.

According to UNEP, the good news is that protection, sustainable management and restoration of wetlands work, and this damage can be reversed.

One project in the Baltic, for instance, aims to improve water quality in lagoons polluted by fertilizer run-off by using floating, vegetation-rich, wetlands to remove nutrients such as nitrogen and phosphorus.

In 2015, under Sustainable Development Goal 6, Target 6, all countries committed to protect and restore wetlands, by 2030.

The World Day, 2 February, also marks the anniversary of the Convention on Wetlands, which was adopted as an international treaty in 1971.

Guterres asks for immediate cessation of hostilities in Ethiopia