By World Organization for Development On Jan 6, 2022

Amid alarming reports of deadly violence in Kazakhstan, the UN High Commissioner for Human Rights and the Special Representative of the Secretary-General for Central Asia have called for restraint and dialogue.

Speaking to journalists on Thursday in New York, the Spokesperson for the Secretary-General, Stéphane Dujarric, said the Organization continues to follow the situation “very closely.”

Mr. Dujarric confirmed several contacts between the UN and the authorities in the country, including a call on Thursday morning between Special Representative Natalia Gherman and the Deputy Foreign Minister, Mukhtar Tileuberdi.

During these exchanges, appeals to exercise restraint, refrain from violence and promote dialogue to address the situation, were reiterated by Ms. Gurman, in behalf of the Secretary-General. 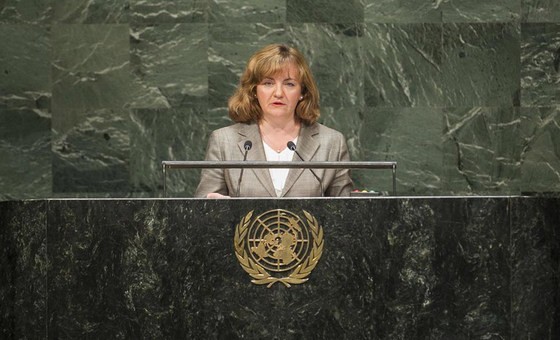 The UN High Commissioner for Human Rights, Michelle Bachelet, also urged everyone, including security forces, protesters and others, to refrain from violence and to seek a peaceful resolution.

In a statement, she said that a police spokesperson in the main city, Almaty, reported that security forces had killed dozens of protesters. In addition, almost 1,000 people have reportedly been injured in the protests.

According to news agencies, protests began on Sunday when the government lifted its price cap on LPG, or liquified petroleum gas, which many use for their cars and heating, but the unrest has since spread to include longstanding political grievances.

The Interior Ministry informed that 12 law enforcement officers have died in the unrest and 317 police officers and members of the National Guard have been injured.

“International law is clear: people have the right to peaceful protest and freedom of expression. At the same time, protesters, no matter how angry or aggrieved they may be, should not resort to violence against others,” Ms. Bachelet said.

Riot police allegedly used tear gas and flashbang grenades in clashes with demonstrators in Almaty. At the same time, protesters seized some government buildings, setting them on fire, and attempted to storm police stations.

Ms. Bachelet also pointed to reports that, on 6 January, intense shooting erupted between the military and armed individuals in front of Almaty city hall.

The High Commissioner reminded the Kazakh authorities that force must be employed subject to strict requirements of necessity and proportionality.

🇰🇿 #Kazakhstan: Amid alarming reports of deadly violence, UN Human Rights Chief @mbachelet urges all, including security forces, protesters and others, to refrain from violence and to seek a peaceful resolution of grievances. Learn more: https://t.co/4lJ3IXJjZi pic.twitter.com/SxQtF1EQwx

A state of emergency declared in several areas on 5 January, including in the main city of Almaty and the capital, Nur-Sultan, has now been extended to the whole country.

The decision, including a curfew from 11pm to 7am, called for restrictions to remain in place until at least 19 January.

Ms. Bachelet said that States have the right to declare states of emergency but added that “any derogation of human rights is subject to strict requirements of necessity and proportionality.”

“Certain rights, including the right to life, the prohibition against torture and other ill-treatment, and the right not to be arbitrarily detained, continue to apply in all circumstances,” she said.

Kazakh authorities on Wednesday requested security forces to be sent to the country under the Collective Security Treaty Organization (CSTO), a regional security pact that includes Russia, Belarus, Tajikistan, Kyrgyzstan and Armenia.

Kazakh officials have also informed that more than 2,000 people have been taken into police custody.

Ms. Bachelet called for all those arrested and detained solely for exercising their rights to peaceful protest and freedom of expression, to be released. She stressed that all allegations of human rights violations should be “promptly, independently and thoroughly investigated.”

Since Sunday, Internet services have been significantly disrupted, progressing to a complete shutdown.

For the High Commissioner, shutting down the Internet “is not the answer to a crisis but risks fueling the violence and unrest.”

She urged the authorities to ensure Internet services, which are vital for emergency health services during the COVID-19 pandemic, to be “immediately and completely restored.”

In recent days, the Kazakh Government has said it hopes to have an inclusive and constructive dialogue with protesters.

Ms. Bachelet said it was now time to “take all steps” to make sure this dialogue happens and to respect and protect human rights during the state of emergency and beyond.