By World Organization for Development On Feb 3, 2022

UNICEF is working with partners to rebuild and rehabilitate schools and hospitals following the conflict in Mosul, Iraq.

Following reports on Wednesday of civilian casualties during airstrikes on the Iraqi city of Ninewa, the UN Assistance Mission (UNAMI) reiterated that Iraqi sovereignty and territorial integrity “must be respected at all times”.

In a statement, the Turkish defense ministry said the goal of the new aerial offensive was to protect Turkey’s borders from “terrorist threats.”

In a post on Twitter, UNAMI reiterated that “local populations must be protected” and “disputes should be addressed through dialogue and cooperation.”

Following airstrikes in Ninewa with civilian casualties reported, we reiterate that Iraqi sovereignty and territorial integrity must be respected at all times. Local populations must be protected, disputes should be addressed through dialogue and cooperation.

Explosives on the ground

In the meantime, the UN Children’s Fund (UNICEF) said on Wednesday that four children - three boys and a girl – have died, and two have been maimed over the past week, due to explosive devices left behind by combatants.

The incidents occurred in Babel province and the capital, Baghdad, while children were simply carrying out daily chores, such as collecting wood.

According to the agency, these are not isolated incidents.

Over the last year, 125 children were killed or maimed by explosive remnants of war (ERW) and unexploded ordnance; 52 lost their lives, and 73 were seriously injured.

UNICEF says stronger efforts are needed to reduce the harm they cause, especially to curious boys, as the number of child casualties grew 67 per centcompared to the previous year. 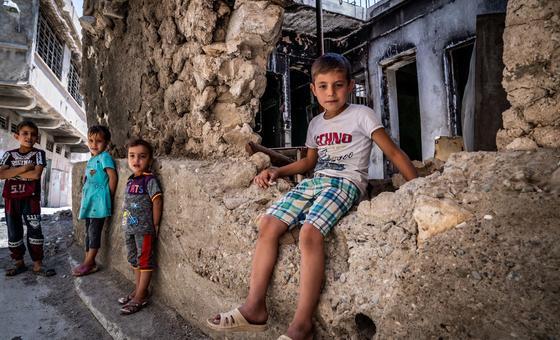 A young boy recalls the sound of shelling and bombardment which damaged his house during the war in Mosul, Iraq., by © UNICEF/Anmar

In a statement, the agency Representative in the country, Sheema SenGupta, reminded all stakeholders that child safety must always remain the primary consideration.

“ERW continues to be a primary reason for the civilian casualties, with children being especially vulnerable – their smaller size makes them more likely to receive the full impact of the blast, making it even more lethal”, she explained.

The agency urges all parties to clear existing mines and unexploded ordnance and promote victim assistance.

UNICEF also urges the national Government and donors to support Explosive Ordnance Risk Education activities, so that children and community members in areas previously affected by conflict, receive information on how to protect themselves.

Finding homes for more than a million displaced Ukrainians