A wind farm in the People’s Republic of China.

The UN Secretary-General on Monday called on China to present an “ambitious” Nationally Determined Contribution in the run-up to the UN Climate Conference, COP26, starting in Glasgow at the end of this week.

António Guterres commended the country’s decision to end financing of coal-fired power plants abroad, and direct support for green and low carbon energy production, stating that the world “must do everything possible to keep the 1.5-degree goal of the Paris Agreement alive.”

Mr. Guterres also said the UN also fully supports the Chinese presidency of the COP15 Biodiversity Conference, happening in Kunming 25 April-8 May of next year. For him, “ambition on biodiversity and climate are mutually reinforcing.”

“Both in Glasgow and Kunming, we must do our part to make peace with nature and safeguard our planet for future generations”, he added. 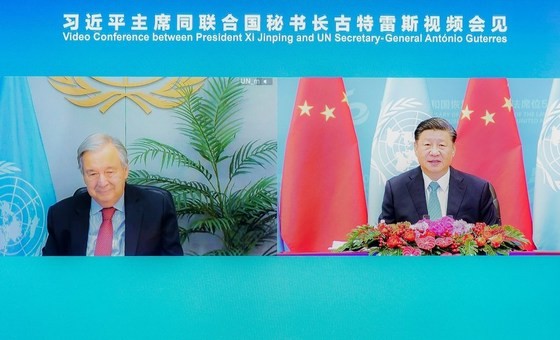 Mr Guterres was speaking at a ceremony celebrating the 50th anniversary of General Assembly resolution 2758, titled “Restoration of the lawful rights of the People’s Republic of China in the United Nations”.

For the Secretary-General, in the decades since, the country “has become an increasingly important contributor to the work of the Organization and a major pillar of international cooperation.”

He thanked China for its role implementing the Sustainable Development Goals, highlighting the “significant progress” to eradicate poverty in all forms.

“China’s achievements provide valuable lessons in poverty alleviation that are being shared with other countries through South-South Cooperation”, he said.

Despite this progress, he said the world “faces a torrent of tests”, such as rising inequality, climate crisis, COVID-19 pandemic, geopolitical tensions, multiplication of conflicts, and human rights under threat.

“We need to come together to bridge great divides and solve our challenges through enhanced international cooperation”, he said.

For Mr. Guterres, this includes strengthening the multilateral system, as detailed on his report to the General Assembly Our Common Agenda, containing 90 specific proposals.

Calling China a “steady partner” of the Organization, the Secretary-General reminded that the country is the secondlargest contributor to the regular and peacekeeping budgets.

He also highlighted the ongoing COVID-19 pandemic, saying the UN counts on China to play an “essential role” by stepping up efforts to make vaccines a global public good.

Mr. Guterres also recalled that China had hosted the conference which approved the most comprehensive global action plan for gender equality, resulting in the Beijing Declaration.

“Securing women’s equality and full representation must be central to peace and development”, he concluded.

Afghanistan on ‘countdown to catastrophe’ without urgent humanitarian relief