By World Organization for Development On Jan 18, 2022

A fifteen-year-old girl from the Central African Republic missed two years of school when she was a child soldier.

Although international action over the past 25 years has led to the release of more than 170,000 boys and girls recruited to fight, more remains to be done, UN Secretary-General António Guterres said on Tuesday.

Mr. Guterres was among senior officials, ambassadors and other members of the international community marking the 25th anniversary of the UN mandate on Children and Armed Conflict (CAAC).

25 years ago, we decided to take an important step to #ACTtoProtect children from dreadful impact of hostilities

Today, we need to continue to reflect on needs of children & acknowledge what was achieved & what still needs to be done to better protect conflict-affected children pic.twitter.com/K32QEb4YpQ

Besides the thousands of children freed by armed groups and forces during this time, hundreds of life-saving commitments and action plans have been signed and implemented by warring parties.

“But, much more is needed,” Mr. Guterres said in a video message for the online commemoration. “Children are still in harm’s way.  Peace is in short supply.  Cycles of violence and despair won’t stop automatically.”

The Secretary-General urged countries to continue supporting the UN Office on Children and Armed Conflict, and keep the promise made more than two decades ago.

“We need to strengthen our support of released children so they can reintegrate into their communities.  We need to place the needs and rights of children first in peace negotiations.  And we need to honour their bravery and resilience by giving them a full and active voice in their countries’ futures,” he said.

In conjunction with the anniversary, the UN Office on Children and Armed Conflict has issued a report that takes stock of challenges, gaps, successes and opportunities since its establishment.

War can impact young lives in numerous ways.  In addition to recruitment, children are killed and maimed by explosive remnants of war and active shooting incidents, abducted on the way to school, or raped while fetching wood and water.

Virginia Gamba, Special Representative of the Secretary-General for Children and Armed Conflict, said the study also charts a way forward to further strengthen protection, and galvanize support at the international, national and local levels.

“The CAAC mandate requires us to be proactive, and not solely reactive, to break the cycles of violence that continue to harm children daily. It obliges us to also work towards preventing these violations before they occur,” she said.

As the mandate “was always meant to be one of collaboration”, she underlined the critical role for governments, international and regional organizations, civil society and communities both in preventing and addressing violations and in responding to the needs of survivors.

Collaboration has brought results, she added, pointing to examples from countries such as the Central African Republic, the Philippines, the Democratic Republic of the Congo, and Colombia. 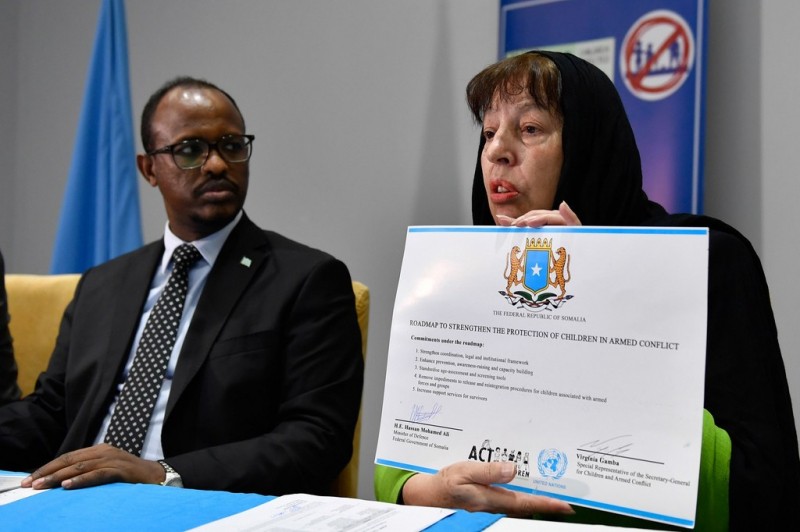 Virginia Gamba, the Special Representative of the Secretary-General for Children and Armed Conflict, displays the signed roadmap to strengthen the protection of children in armed conflict during a meeting with Somali Federal Government Ministries and commissioner of police in Mogadishu, Somalia on 28 October 2019.

Ms. Gamba also stressed the need to “seize the momentum” to do more, stating that securing the release of child recruits and reintegrating them back into their communities should be everyone’s priority.

Together with the UN Children’s Fund (UNICEF), her office co-chairs the Global Coalition for Reintegration of Child Soldiers.

Henrietta Fore, the UNICEF Executive Director, urged countries to keep speaking out on behalf of the many children who still require help.

“The UN should continue to prioritize this precious and unique mandate,” she said.

“We should seize all opportunities to increase visibility and awareness of the terrible impact of conflict on children. We should be courageous in taking steps to end impunity and advance accountability for children in situations of armed conflict.”

COVID-19: WHO expresses hope worst of Omicron wave is over