By World Organization for Development On Dec 9, 2021

Myanmar, where the IPU received reports of human rights violations against 55 parliamentarians.

Political instability is a key factor behind new data revealed on Thursday which shows that persecution of Members of Parliament (MPs) worldwide, has reached a record high. The annual figures were released by UN partner the Inter-Parliamentary Union, on the eve of Human Rights Day, marked on 10 December.

The latest numbers report that at least 673 parliamentarians from 44 countries are under threat, most of them in countries wracked by political in-fighting and instability.

The data confirms a consistent increase since 2014 in the number of cases recorded by the IPU’s Committee on the Human Rights of Parliamentarians. The body consists of MPs from around the world, and acts on complains of abuse suffered by their peers.

According to IPU, many MPs around the world face abuse, mistreatment or even death, and the role of the Committee is to seek to protect and defend them.

When compared with the previous year, the 2021 figures represent an increase of 22 per cent, with 552 MPs in 42 countries reporting persecution.

Political instability accounts for record number of persecuted #MPs worldwide.
Data reveal that 6⃣7⃣3⃣ MPs from 4⃣4⃣countries are under threat.
The #IPU has released its latest #humanrights caseload in time for #HRD2021 tomorrow.
You can access them here
➡️https://t.co/3fPndc2JfO pic.twitter.com/Qzz2UM0iKL

The IPU said most of the cases concerned opposition MPs, who in doing their jobs, have suffered abuse directed by government forces. “The most common violations reported were undue suspension and revocation of parliamentary mandate, violations of freedom of expression, threats or acts of intimidation, and a lack of a fair trial”, the press release continued.

At the recent 143rd IPU Assembly in Madrid, Spain, the Governing Council, the IPU’s plenary decision-making body, approved a number of decisions submitted by the Committee on the Human Rights of Parliamentarians.

The cases were related to 13 countries, including Brazil, Pakistan, Iraq, and Libya, among others.

See also  Bachelet: ‘We need to push back against hatred’

Following the military takeover and the suspension of Parliament in February 2021, the IPU received specific reports of human rights violations against 55 parliamentarians elected in the November 2020 ballot, who were victims of the 1 February coup.

Those violations included threats, acts of intimidation, arbitrary arrest, torture, ill-treatment, and criminal charges with no apparent justification, the organization added.
The IPU said it is particularly alarmed about the welfare of the parliamentarians in light of the recent news that detained leaders Aung San Suu Kyi and Win Myint have been sentenced to two years in prison, following charges of incitement and breaking COVID-19 rules.

Uptick in complaints from Tunisia

The global organization of national parliaments also reported a significant uptick in complaints from Tunisia following the suspension of the Tunisian parliament by President Saied in July 2021.

Noting that reports have been received on behalf of 21 Tunisian parliamentarians, and complains described loss of parliamentary immunity and freedom of movement, the Committee said it was also concerned “about the continued suspension of the parliament, which was supposed to be of limited duration”.

Moving to Venezuela, the IPU said the Committee on the Human Rights of Parliamentarians had consistently lobbied on behalf of dozens of persecuted opposition MPs, elected to the National Assembly in Venezuela in 2015.
“In August 2021, after repeated requests, an IPU mission was finally able to visit Venezuela. The parliamentary delegation met State authorities as well as more than 60 opposition parliamentarians elected in 2015 to assess the situation on the ground as well as to identify solutions to resolve the political crisis.”, IPU continued.

The IPU said it was pleased to note the release of two opposition MPs, Freddy Guevara and Gilberto Sojo, before and after the mission left Caracas. 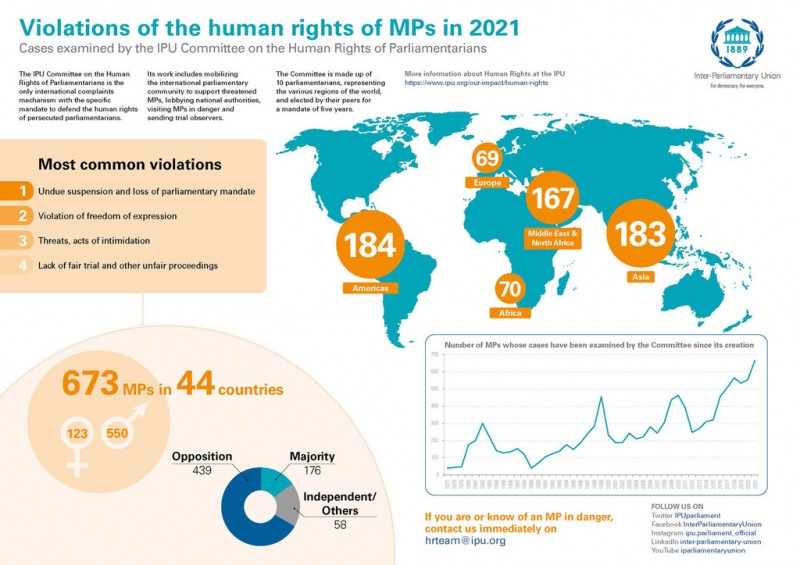 Violations of the human rights of Parliamentarians in 2021.