Despite repeated calls for concrete international action to reduce the tragic death toll of migrants, dozens were killed in Mexico when a crowded truck overturned in Chiapas on Thursday night, the International Organization for Migration’s (IOM) said in a statement released on Friday.

At least 54 reportedly Central American migrants died and more than 100 were injured – the single deadliest incident for migrants in Mexico since at least 2014, when IOM began documenting deaths.

“Today is a sad day for the families of many immigrants“, IOM tweeted.

The migrants were crammed into the truck’s trailer when it reportedly rolled on a sharp curve, according to news reports showing pictures of victims strewn across the road next to the overturned truck.

The agency underscored the daily risks faced by millions of people in search of a better life away from their countries of origin, saying, “we can do more for them”.

Some 651 people have died this year attempting to cross Mexico’s border into the United States, more than in any year since 2014.

“This increase is especially concerning because most data for this border region are reported only after the year ends”, said IOM.

UN Spokesperson Stéphane Dujarric told journalists at a regular press briefing: “If this latest incident isn’t a reminder for the world and for Member States to agree on controlled and managed international migration plan it’s unclear to see what is“.

Citing IOM, he said that the 2021 migrant death toll in Mexico has surpassed 4,470 men, women and children.

Moreover, tthe number of deaths and disappearances has increased on many migratory routes across the world in 2021, including in Europe and the Americas.

Chiapas Governor Rutilio Escandón described it as one of the worst accidents of its kind in Mexico, according to news reports.

Forty nine people were confirmed dead at the scene, and five more died in hospital.

Emergency officials said the victims included men, women and children. Most of the people on board were from Guatemala, but there were others from Honduras, Ecuador and the Dominican Republic.

The truck was reportedly speeding when it flipped on a sharp bend and hit a pedestrian bridge on a main road leading to the Chiapas state capital, Tuxtla Gutiérrez, at about 15:30 local time on Thursday, news sources reported.

Chiapas, which neighbours Guatemala, is a major transit point for undocumented migrants. 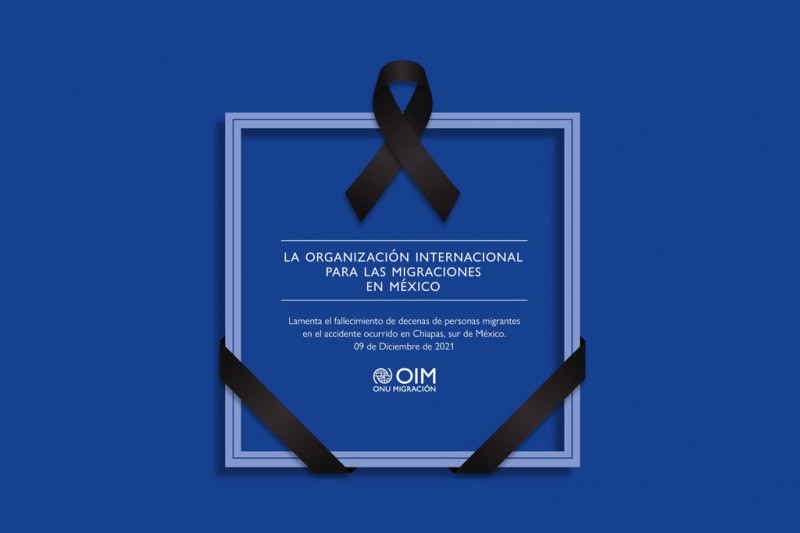 IOM Mexico regrets the deaths of dozens of migrants in an accident in Chiapas, southern Mexico, on 9 December 2021.

Rights abuses in Myanmar ‘deepening on an unprecedented scale’