By World Organization for Development On Feb 10, 2022

Brazilian navy ship Carlos Chagas that has a mammography unit on board.

Women living in Amazon River communities now have increased access to breast cancer screening along even its most remote banks, thanks to two new mammography units installed on Brazilian navy ships.

Procured by the UN-backed International Atomic Energy Agency (IAEA), the mammography units will triple the current capacity for such tests in the remote region.

One of the ships, Soares de Meirelles, already started delivering services along the vital South American waterway, and will soon be joined by the second vessel, the Carlos Chagas.

Women in the Amazon River region had to endure long journeys to access breast cancer screening services. Now, with our help, two 🇧🇷 ships are equipped w/ mammography units and are ready to sail the river, improving healthcare in the region. https://t.co/sohaG60rYy #CancerCare4All pic.twitter.com/vkDv9ufCh0

In Brazil, breast cancer represents almost 30 per cent of all types of cancer with approximately 40 per cent of patients only diagnosed in the advanced stages of the disease.

Screening is used to detect cancers at an early stage when they can be treated most effectively.

The first stage in the screening involves an X ray (mammogram). With the two new units, each ship is able to perform up to a thousand such screenings per year.

In a statement, IAEA Director General, Rafael Mariano Grossi, stressed the importance of screening to step up the global fight against cancer.

“Thanks to this unique partnership, timely and effective breast cancer services can now be delivered also to these remote areas in Brazil,” he said.

They will travel from the Amazon River delta to the borders of Colombia, Guyana, Peru, Suriname and Venezuela, whose communities could also benefit from such services.

Due to their design, navy ships can navigate along the narrow and shallow waters to bring much-needed healthcare directly to women living by the river’s banks.

As an example, women in the city of Tabatinga, near the border with Peru and Colombia, had to travel 1,600 km, over seven days, to receive such screening services at the healthcare centre in Manaus, the capital of the Brazilian state of Amazonas. 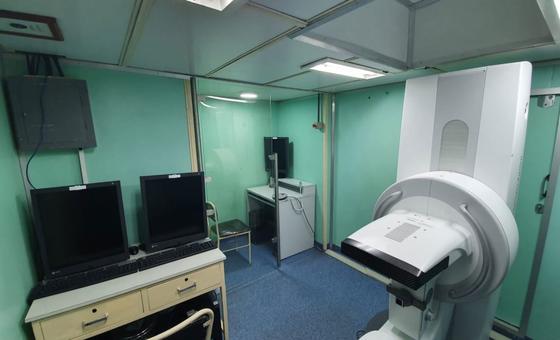 A mammography machine on board the Brazilian navy ship Carlos Chagas., by Navy Nuclear Development Directo

The two mammography units were procured and installed on the ships in 2021 through the IAEA Technical Cooperation programme.

The Agency also provided funds for training of personnel operating the equipment.

Despite the COVID-19 pandemic, Soares de Meirelles succeeded in performing around 300 mammograms in 10 cities in October 2021.

Delivering cancer screening services to one of the most remote areas in the world is an example of the IAEA’s assistance in increasing access to cancer care globally.

Last week, the agency announced a new initiative, called Rays of Hope, to support Member States with diagnosis and treatment using a range of radiation technologies, beginning with African countries most in need.

The IAEA supports countries in establishing radiotherapy services and in integrating these into comprehensive national cancer control plans.

It also offers training for nuclear and radiation medicine personnel, technical advisory services, and assists in the financing and procurement of equipment.