Griffiths to Security Council: ‘Your responsibility is not over’ to Syrian people

By World Organization for Development On Jan 27, 2022

Children sit outside their family tent at the Alzhouriyeh makeshift camp in east rural Homs, Syria.

The UN and its partners need to reach more Syrians with immediate life-saving aid, the UN relief chief warned the Security Council on Thursday, calling for expanded access and more funds to sustain humanitarian operations, as the country struggles with an uptick in violence, deepening economic crisis, and a winter storm that has left a ‘trail of destruction’ in its wake.

“It is not over for the Syrian people,” said Emergency Relief Coordinator Martin Griffiths, as he outlined the myriad challenges.  “And your responsibility is not over either.”

As I've said before, we're failing the Syrian people, young and old. Failure each year can't be our strategy.

This year, we have to lighten the load on Syrian civilians.

I urge Member States to work with the UN and other key humanitarian agencies on a new approach.

The humanitarian affairs chief said it was essential to scale up early recovery programmes – aimed at addressing needs that arise during the humanitarian phase of an emergency – which can offer a pathway to more self-sufficiency and restore basic services.

Perhaps most immediately, he drew attention to the hundreds of children who this week, have been trapped in a terrifying prison siege in Al-Hasakah, in Syria’s northwest.

He cited reports announced by Henrietta Fore, Executive Director of the United Nations Children’s Fund (UNICEF), on 25 January, of fatalities among children besieged inside the Al-Hasakah’s Ghwayran military detention facility, and of children trapped as ISIL-affiliated inmates battled Kurdish-led Syrian Defence Forces (SDF), being forced to take part in the fighting.

News reports indicate the siege is now over with the Kurds regaining control of the prison, but Mr. Griffiths told ambassadors that it was of “critical importance that all children are accounted for, evacuated to safety, and supported,” he insisted.

Their predicament echoes that of the country, Mr. Griffiths stressed.  He described Syrian girls and boys shivering in tents in the snow, while others are stuck in displacement camps or detention facilities, and millions more – lucky enough to have housing – are still missing out on a healthy diet and reliable schooling.

“We are failing the Syrian people, young and old,” he said.  “I urge you to work with the United Nations on new approaches.”

The Under-Secretary General recalled that six civilians were killed on 20 January when missiles landed in Afrin city, while another airstrike in early January, severely damaged the main water station servicing Idlib city.

With the cost of a food basket reaching new highs in each of the last four months, and international aid declining, “the food aid we provide to millions of people each month is just not enough,” he warned.

He called for ongoing support for the UN’s six-month plan for humanitarian operations, drawing attention to early recovery projects to support food production and the cross-line delivery of aid to Syria’s northwest.  Two such operations have been completed and a third is expected to take place soon, he added.

‘From war to hell’

Mr. Egeland – who was formerly UN Emergency Relief Coordinator, from 2003 to 2006 – said the economic crisis, exacerbated by drought, is now so deep that families he had met during his recent visit described their journey as one “from war to hell”.

He implored the Council to end this “suffocating paralysis”, requesting “help from you as members of the Security Council, and from you as influential powers with parties and actors in the region.  “The situation demands it.”

Specifically, Mr. Egeland called for help to end access restrictions on all sides of the conflict lines, stressing that humanitarian work is still too often held back by administrative, logistical, legal and physical barriers.  More effective humanitarian diplomacy is needed.

For example, he said the Russian Federation can help on the Syrian Government side, where the Norwegian Refugee Council is still unable to provide legal aid to displaced people and returnees, while Turkey and the United States can help with de facto authorities in opposition-controlled areas. 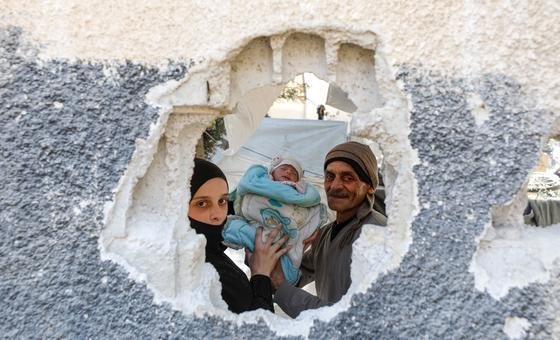 He also called for help in negotiating solutions to conflicts in Idlib and elsewhere, emphasizing that “we cannot allow a war to rage in what is, in reality, a gigantic string of displacement camps.”

A call for solidarity

Meanwhile, he said civilians must be able to seek protection and emphasized that “now is not the time to close borders.”

It will also be essential to resume a deconfliction system, ensure cross-border and cross-line relief, secure access to water and agreement around waterways from the north, support the rehabilitation of civilian infrastructure, enable durable solutions for refugees and close the funding gap for humanitarian operations.

“2021 was one of the worst years on record for civilians in Syria,” he said. “We urge donor countries not to turn their backs in 2022.”

In central Sahel, ‘needs are growing faster than generosity’