By World Organization for Development On Nov 13, 2021

Migrants stranded in harsh conditions on the Belarus-Poland border.

Amid growing concerns about the plight of migrants, refugees and asylum seekers at the Poland-Belarus border, the UN rights office and UN refugee agency on Friday urged all parties to respect human rights and refrain from using them for political ends.

Following weeks of rising tension, the development follows news footage earlier in the week showing migrants located between the countries, attempting to avoid teargas and make their way through barbed wire fences.

At least 50 per cent of the migrants stranded between #Belarus and #Poland are women and children.

They slept rough for the fourth night.

The cost of inaction is human life. pic.twitter.com/Xsb2i0pt7a

“It is a terrible situation, we are seeing people in terrible circumstances, in the bitter cold, even reports that people have died”, said Liz Throssell, spokesperson, Office of the High Commissioner for Human Rights (OHCHR).

“This is why the High Commissioner has spoken out and other UN agencies have spoken out really clearly about this. The human rights of migrants and refugees have to come first. It is really important they must be respected under international human rights refugee law, but as for the political dimension to this, I would leave that to others to address that.”

Echoing that message, UN Refugee Agency (UNHCR) spokesperson Shabia Mantoo told journalists in Geneva that the human rights and the safety of refugees and migrants were “paramount…we do believe that we have said it many times that [using] refugees and asylum seekers and migrants to achieve political ends is unacceptable and must stop and that is completely deplorable”.

See also  9.4 million people are ‘living their worst nightmare’ in northern Ethiopia due to ongoing conflict

The border became a flashpoint after the European Union (EU) imposed sanctions on Belarus, based on alleged grave human rights violations there, and the country diverted a commercial flight between two EU nations to remove a leading dissident in May, according to news reports.

In recent months, Poland, Lithuania and Latvia – all EU members – have seen an increase in the number of migrants, many from the Middle East, trying to enter their territories via Belarus.

In a strongly worded statement in September, UN rights chief Michelle Bachelet also expressed concern at “persistent allegations” of “widespread and systematic torture of protesters” in Belarus, following the crackdown of demonstrations over the re-election of President Alexander Lukashenko in August last year. 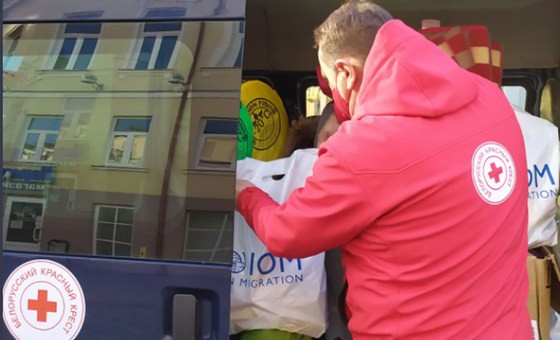 Highlighting that the human rights of migrants and refugees should be fully respected “regardless of their nationality, status or circumstance”, Ms. Throssell added that the “strong security focus and politically charged responses on both sides – and that includes the increased deployment of troops and accompanying inflammatory rhetoric – they only exacerbate the vulnerability and risks that migrants and refugees face”.

Responding to questions surrounding unconfirmed reports that migrants have been subjected to mock executions by soldiers, she noted that OHCHR was following developments “very closely…we do not have access there, so the reports that you’ve been hearing, we are not in a position to confirm them”.

Libya elections ‘essential next step’ towards peace and stability: Guterres