By World Organization for Development On Jan 18, 2022

A nutrition nurse talks to women gathered at a UNICEF-supported clinic during a nutrition awareness session in Kandahar, Afghanistan.

With COVID-19, the situation for women human rights defenders and the prospects for women’s full participation in building peace, has become “vastly worse”, the UN High Commissioner for Human Rights said on Tuesday.

The human rights chief drove home that, between 1992 and 2019, only 13 per cent of negotiators, 6 per cent of mediators and 6 per cent of signatories in major peace processes worldwide, were women.

In terms of support, barely 1 per cent of funding in fragile or conflict-affected countries goes to women’s rights organizations.

“And that was before the pandemic struck – and before a wave of intensifying conflicts, undemocratic political transitions and disastrous humanitarian crises took hold in many societies, further reducing women’s rights”, she said.

In 2020, the High Commissioner’s Office (OHCHR) verified 35 killings of women human rights defenders, journalists and trade unionists in seven conflict-affected countries. The number, which is certainly an undercount, surpassed the confirmed numbers of killings in 2018 and 2019.

According to Ms. Bachelet, in every region, women have been subjected to arrests and detention; intimidation, sexual violence, and harassment via smear campaigns.

Intimidation and reprisalsby State and non-State actors against people who cooperate with the UN, also remain high, she said, including in countries which are on the Council’s peacekeeping agenda.

Decisions on peace that do not reflect women's voices, realities and rights are not sustainable. Addressing discrimination, inequality, denials of women's civic space and gender-based violence must be a priority for building peace.

In Afghanistan, she pointed to a “humanitarian disaster of unprecedented proportions”, arguing that the “denial of the fundamental rights of women and girls is massively damaging the economy and the country as a whole.”

In recent months, many Afghan women human rights defenders, journalists, lawyers and judges have been forced to flee or to go into hiding, often after repeated threats.

Many have lost all sources of income. They have also been excluded from decision-making that affects their lives and prevented from fully exercising their rights.

Ms. Bachelet urged the Security Council to ensure that the perpetrators of these violations are held accountable. She also asked Council members to use their influence with the Taliban to encourage respect for fundamental human rights.

In the Sahel region, the High Commissioner remembered that several countries are at the very bottom of UNDP’s Gender Equality Index.

She described a scenario where extremely violent armed group attacks increase the threat of abductions, violence, exploitation and abuse of women and girls, as well as local closures of schools.

Despite these obstacles, Ms. Bachelet said she felt encouraged during a recent mission, where she heard senior members of the G5 Sahel joint forces, working to end terrorism and trafficking in the region, emphasizing the importance of increased integration.

In Myanmar, where, women human rights defenders have long been a force for peace and inclusivity, she said many women’s civil society groups have been forced to shut down amid the violence that has gripped the country since February last year.

Women medical workers, media workers, protestors, participants in civil disobedience, activists on social media and those providing food and shelter to people in need, have been targeted for assault and arbitrary detention. 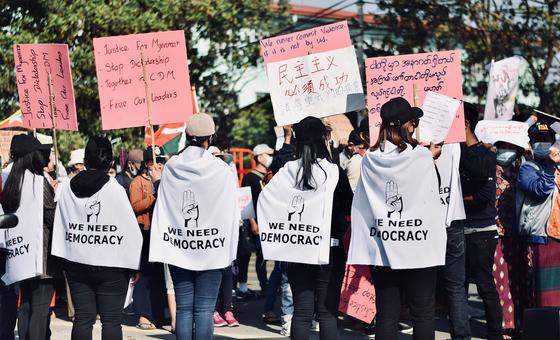 Of the estimated 10,533 people detained by the State Administration Council and its affiliated armed elements between February and November of last year, women and girls number over 2,100.

In contrast,the human rights chief called Colombia’s 2016 Peace Agreement “a global landmark” in terms of women’s participation and the inclusion of gender-specific measures.

She argued, nonetheless, that some gender-specific measures on issues such as land reform, political participation and security guarantees should be strengthened.

Describing this “wave” of challenges, the High Commissioner argued that the international community must “push back against attempts to attack, silence and criminalize women’s rights to defend rights, participate in decision-making and express dissenting opinions.”

She also asked for “clear advocacy” and “significant investment”, stating that “decisions on peace that do not reflect women’s voices, realities and rights are not sustainable.”

“The work of addressing discrimination, inequality, denials of women’s civic space and gender-based violence should also be viewed as a priority for building peace”, she concluded.