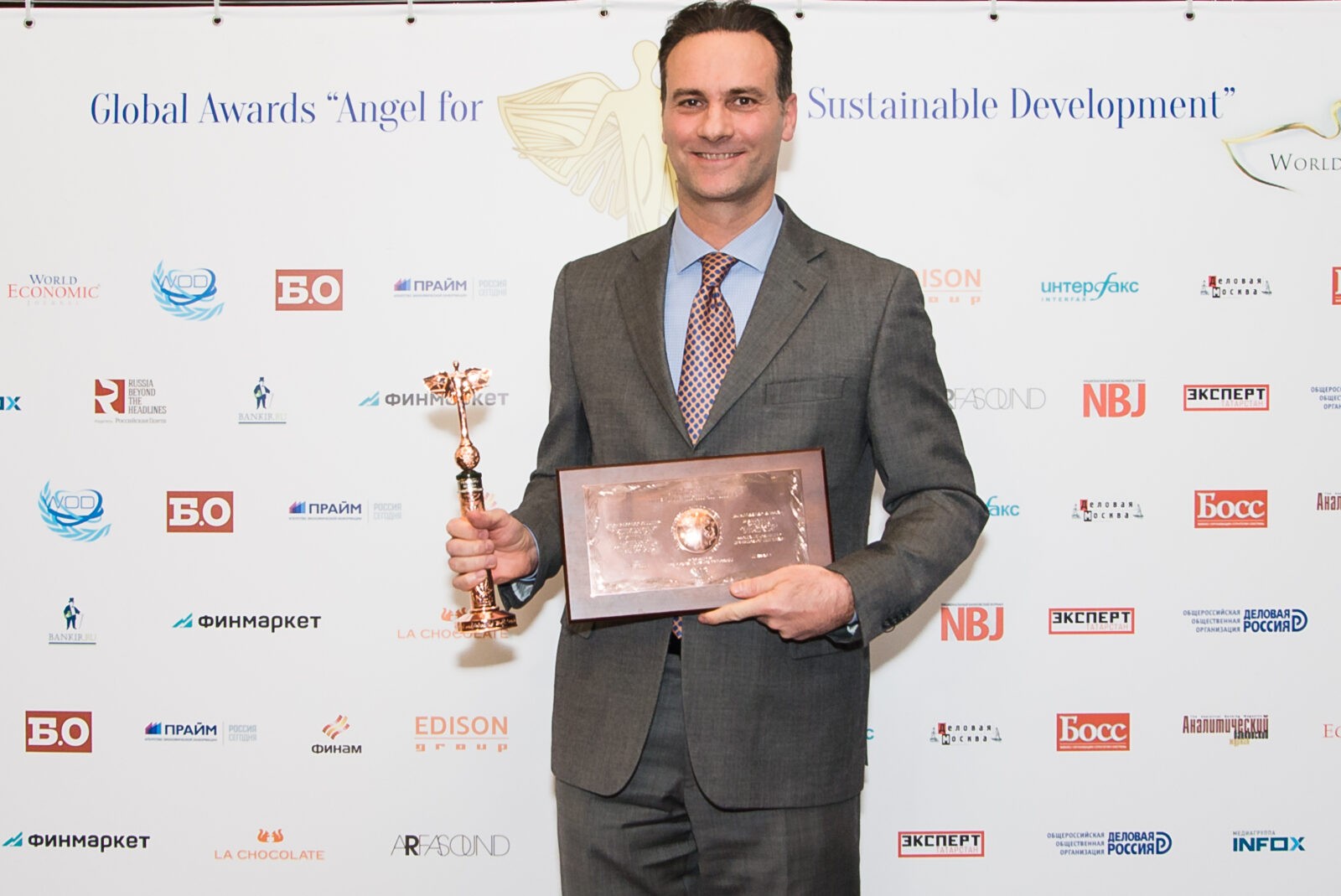 On November 30, 2015, the IV official ceremony of awarding the Investment Angel award took place in Moscow. The ceremony was attended by representatives of state and regional authorities, business, civil society, investors and the media.

The organizer of the award, the World Organization for Development, based on the ratings of the Agency for Strategic Initiatives (ASI), the rating of its own analytical service WOD-Research and official statistics, awarded the leaders of the most investment-attractive regions of the Russian Federation, as well as the most active foreign investors.

The organizers of the award noted the significant contribution of Ferrero Russia to the development of the Russian economy, to improving the investment climate, as well as social initiatives implemented in Russia.

“A key success factor for Ferrero is our commitment to sustainable development. This is reflected in responsible consumption, in the use of sustainable farming practices and in the development of the regions in which we operate. Over the years of presence in Russia, Ferrero has successfully passed all stages of development from a small representative office to a large commercial and manufacturing company with a developed distribution network. At the moment, all major Ferrero brands are represented on the Russian market. Today, Ferrero in Russia employs more than 1,500 people and occupies 16.7% of the confectionery market in those segments where our products are present,” comments Massimiliano Paoleschi, CFO of Ferrero for the CIS countries.

In Russia, as well as around the world, the main “ingredients” of Ferrero’s success are the highest quality, careful selection of raw materials, constant innovation and attention to the needs of the local community.

In 2015, the Ferrero Group is celebrating 20 years of successful operations in Russia.

The Ferrero Group entered the Russian market in 1995, presenting its world-famous confectionery products to consumers: Raffaello, Kinder Chocolate, Kinder Surprise, Nutella, Tic Tac. In 2008, the company announced the launch of an investment project for the construction of its own factory in the Vladimir region, and already in 2009, the first line for the production of Kinder Chocolate was launched.

The confectionery factory in the Vladimir region is one of the largest enterprises of the Ferrero Group in the world and the second-largest Ferrero factory located in Eastern Europe.

The factory created 1,500 jobs. Four production lines have been launched here, on which the main brands of the company are produced: the Kinder Chocolate line, the Raffaello candy line, the Nutella nut butter line, and the Kinder Surprise line.

With its own production, Ferrero makes a significant contribution to the progressive development of the region’s economy. From the very beginning of production activities in Russia, the company has been actively cooperating with Russian suppliers. Today, 93% of the suppliers of the Vladimir factory are local companies, of which 33% are suppliers from the Vladimir region.

The factory in Vladimir has programs in place to create a positive work environment and ensure the necessary balance between work and personal life. The level of wages of employees of the enterprise is higher than the average salary in the region; employees are also guaranteed an extensive package of social benefits.

Based on the global principles of the Group, Ferrero Russia pays great attention to issues of social responsibility. Among the notable social initiatives of Ferrero Russia, it is worth highlighting the partnership (starting from 2012) with the All-Russian information retrieval system for adoptive parents “Videopassport” Timur and Elena Kizyakov. During the cooperation, with the support of Ferrero Russia, 230 video passports were created for children from orphanages in 12 regions of Russia. As of December 1, 2015, 142 children were placed in families, and documents for nine more children are being processed. Constantly maintaining the focus on the Vladimir region, the geography of cooperation between Ferrero Russia and Videopassport is constantly expanding.

In addition, for the past seven years, the company, in cooperation with the Department of Education of the Administration of the Vladimir Region, has been organizing an annual charity event for children left without parental care, families with disabled children and foster children, and families with many children.

The history of the Ferrero company began in the city of Alba in the Piedmont region (Italy) in 1946. Today, Ferrero has become one of the world market leaders in the confectionery industry, with a consolidated turnover of 8.4 billion euros. Ferrero is the 4th largest chocolate company in the world. The Ferrero Group has 20 manufacturing sites worldwide, including three “Social Enterprises” in Africa and Asia and nine agricultural enterprises. More than 34,000 employees work for the Group’s companies in 53 countries. Ferrero products are sold in over 160 countries.

All activities of Ferrero are based on the principles of social responsibility. The naturalness and high quality of products, the careful selection of the best raw materials, sustainable agricultural practices and constant research and innovation are just some of the key elements of Ferrero’s success. The company continues to invest in the development of local communities through the activities of the Ferrero Foundation, Ferrero Social Enterprises and the Kinder+Sport programme.

Ferrero has been present in Russia since 1995. Over the years of presence in the Russian market, Ferrero has managed to go through all stages of development, from a small representative office to a large commercial and manufacturing company with a developed distribution network. At the moment, all major Ferrero brands are represented in Russia. The Ferrero confectionery factory in the Vladimir region is one of the Group’s largest enterprises worldwide and the second-largest Ferrero factory located in Eastern Europe.

About the founder and organizer of the Investment Angel Award:

The World Organization for Development (Association of the World Organization for Sustainable Development) is an international non-governmental organization that has a special consultative status with the UN ECOSOC – created in 2009 according to the principles and ideas proclaimed by the UN. In its structure, it has the WOD-Research Analytical Research Service, the international edition of the World Economic Journal, and the organizing committee of the International Investment Angel Award. In accordance with its status, it actively advocates and expresses its position on various international platforms, including the UN. Works in the territories of developing and developed countries of the world, including the Russian Federation, CIS, BRICS, EU, USA. Organization website: http://wodngo.org/

Among the main objectives of the award: are the formation of an objective picture of the direct investment market in the international economic space, assistance in identifying innovations and effective anti-crisis solutions in the current economic conditions. The award is given for successful investments in the development and implementation of competitive products of high-quality goods and services. The award is recognized by the world community and is supported by the authorities and prominent representatives of civil society and business.

Ferrero is among the top three winners of the International Investment Award "Investment Angel"
0 289,857
Share FacebookTwitterTelegramPinterestLinkedinVKGoogle+WhatsAppEmail